I have inflicted the crow/raven pinion pun from Saturday's panel onto another friend of mine (known from Wiscon rather than Farthing Party) whom loves all things corvid, and also likes to inflict things like "Iron Bulwer-Lytton" contests on the world.

My day is now complete.

Many of you will have heard of this already, but I think it bears recording.

Not quite a month ago, I was in a hotel room in San Antonio thinking about the Worldcon just ended, and looking forward to the Farthing Party still to come.  I thought about all the work that Jo has put into Farthing Parties over the years -- dealing with hotels, worrying about room blocks, organizing programming, opening her home to us and sharing with us food and drink.  And it seemed to me that it would be a good thing to give her some kind of reward.

It didn't take much further thought about what Jo would like, to come up with commissioning a necklace from

elisem.  So I sent out emails, and people pledged money towards the project.  I got to present it at the Saturday night party, and many people as well contributed money there.

Here is a list of all the people who contributed (in an order contributed by random.org):

ETA: And Don Fitch was inspired by this post to contribute, as well.

On the necklace itself, Elise outdid herself.  She said that the project attracted to itself a number of beads that she had thought were going to be pendants -- it has agatized dinosaur bone, and fossil coral, and boulder opal, and lava from Iceland, "and and and...."

I was stunned.  For myself, I could not be happier with how it turned out.

Its name is "ibidem", which is Latin for "in the same place".  Elise said further:

And that's what Farthing Party has always felt like to me:  somehow, no matter which hotel we happen to use that year, and which combination of people we happen to get, we're all together again in the same place, that glorious place where we talk and think and laugh and learn and share and embrace. Also, it's a bit of a joke, because so many of the beads are landscapes or places, and while they aren't all of the "same place" by any means, they're all of the realm of story.  And that's our place, too.   And even though I don't happen to be coming to Farthing Party in person this year, I'll still be in that place with all of you, in my heart, sharing stories and seeing the look on Jo's face and greeting everybody who's made it back to The Same Place, as it were.

Here's one of the pictures Elise took when it was done: 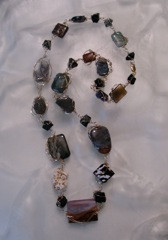 And you can see the full gallery at Elise's site.  (Well worth checking out!)

My best wishes to all of you at the final Farthing Party. I was at the first and had planned to be at the last, but it has not worked out. In fact, I filled out the paperwork for a vacation this weekend back in March, but my employer appears to have misplaced it (or else I did before submitting it) and that was a problem.

Also, a cold which had been waiting in the wings took its cue from a week of deliberate extraversion in job interviews and has been in center stage since Wednesday night. I don't think it's likely that I'd pass it along, but I sure am tired.

I'm finding all of this particularly unfortunate because I am feeling more communicative and less anxious about traveling to a convention than I have in years. I had prepared a couple of conversation-starting ideas for the weekend:

Anyway, I hope that you are all having fun up there, and I look forward to seeing (and meeting) more of you on some other occasion.

Jo, the first Farthing Party was great fun for me, and I'm sure the FPs from then until now have been wonderful also. Thank you for your hospitality and generosity, and may your work continue to bring you the readership and accolades you so truly deserve.

I am finally back from the US and am fully caught up with the physical checks, cash at San Antonio, and PayPal memberships, so if you have sent in your membership and have not got a receipt from me, please let me know asap, at the farthingparty e-mail address and I'll look into it.

In between booking hotels for ReaderCon, WorldCon and NASA Houston visit, I totally blanked out on booking accomodations for FarthingParty, so if anyone needs/wants a roommate, let me know at my e-mail cenk dot gokce at gmail dot com.

Worst case I'll get something at the youth hostel or something but it would be much more convenient to be at the con hotel, for obvious reasons.

After purchasing a membership at LoneStarCon 3 last week, I have discovered that I have another commitment for that weekend, that I must attend.

Am I able to transfer my membership? And, if so, is anybody interested in purchasing it?

This is your 'week from end of room block' reminder that our room block deadline is August 27th. If you have not booked yet, please do so this week. (And as always, please let me know if they appear to be out of the kind of room you want or have any other problems.)

In slightly related news, my hoped-for roommate isn't going to be able to make it: if you want to split a double with me, I would be glad to discuss (It's currently booked to arrive Thursday, leave Monday, though I'm still trying to figure out if I'm coming up on Thursday or on Friday. I come with references.)

With great regret, we find that we are unable to attend Farthing Party as we had hoped.

kateyule is going to have surgery on her knee and will be unable to travel at that time.

Is there any possibility we can get a refund of our membership payment?

Sorry it took a few days, but they have now added rooms of all kinds to the room block (particularly classic for Thursday-Monday), and I've just tested that it works.

If you have other problems, or aren't sure about your reservations, please do let me know! (I'm going to be travelling Aug 10-18, but will still see email/posts here, just a bit less frequently than usual maybe.)

I'm paring down my collection of books (to make room for more books :D) and am offering some of them here in the hopes that they find good homes.

A bit torn between the opposing desires of 1) making sure they all get passed along and 2) giving everyone a chance at them, so for now it will be first come first served and the first 3 books on your want list are yours. The rest of your list will also be yours unless someone else lists them in their first 3 books. Does that make sense? Just post a reply with the books that you want. I'm driving in from GTA, so will only be bringing the books that are requested.

edited to add 21 Sept. 2013: Not nearly as much interest as I had hoped. Besides the books requested by grimmwire, I guess I'll be donating the rest to a community library.